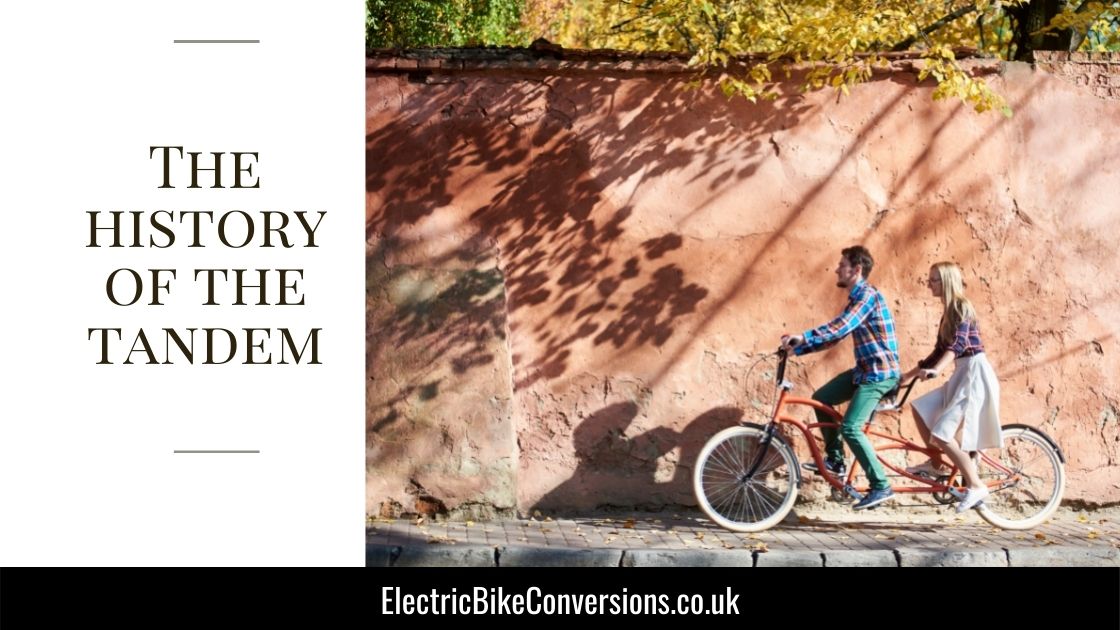 A tandem bike is built to support two riders, with two saddles, two handlebars and two sets of pedals. The rider with the higher level of upper body strength should be the front rider. If you are riding in the front, then you are responsible for controlling the bike’s speed and direction. You must also warn the rider of any obstacles coming up and also for gear shifts.

The rider in the back should be concentrating at all times to keep a central balance. If they are not correctly balanced (leaning too far on either side), they could be the cause of the bike tipping over.

The first appearance of the tandem:

The tandem first appeared in the early 1890’s and it was known as a “courting bike”. It was originally designed for a man and women to ride. The women would be seated in the front seat whilst the man would be in the rear seat. The man would be steer the bicycle through a gear linkage by the rear saddle. This was known to be very fashionable in that time, especially with the upper and middle class couples.

After an inventor called Ignaz Schwinn invented the “middle seated tandem”, the bikes started to be adapted and modified to fit not just 2, 3, 4 or even 5 people, but a 10 seated tandem was introduced by the Orient Bicycle Company.

The tandems main purpose was to allow you to share your bike ride with someone you wanted to be close to, or to cycle with someone who wouldn’t be able to cycle on their own.

The first tandem was introduced by the Rucker Company in 1884. The first tandem had two very large wheels containing forks as well as a jointed backbone. As long as both of the riders worked together when steering and keeping a good balance, the tandem remained very stable.

The next chapter for the tandem:

As bicycle inventors began to gain more knowledge on the tandem, a chain-driven tandem was introduced in 1887. This tandem allowed both riders to pedal the front wheel, whilst they used both the wheels to steer.

The tandem designed for couples:

A company called Humber and Company Ltd redesigned the tandem where they had an open-fronted tandem. This allowed the lady to sit comfortably and spaciously at the front of the bike, whilst also providing her with a vibration-free ride due to the fact she was no longer sitting above a wheel. Another benefit for the lady was that it was very easy for her to escape the bike if an accident was to occur. The new tandem design gave the gentlemen complete control over the steering on the bike.

The main reason people ride tandems these days is because it allows them to reach a higher speed then you would get using a normal bike. The issue of balance and steering are unfortunately still one of the things riders have to deal with, as well as storing them because of their size. Another downside to the tandem is the cost of replacing parts, as they are not easy to get hold of and it could set you back quite far if anything needs to be replaced. However, there are maybe positives to riding on a tandem. One of the main benefits being that you can enjoy your bike ride with someone else.