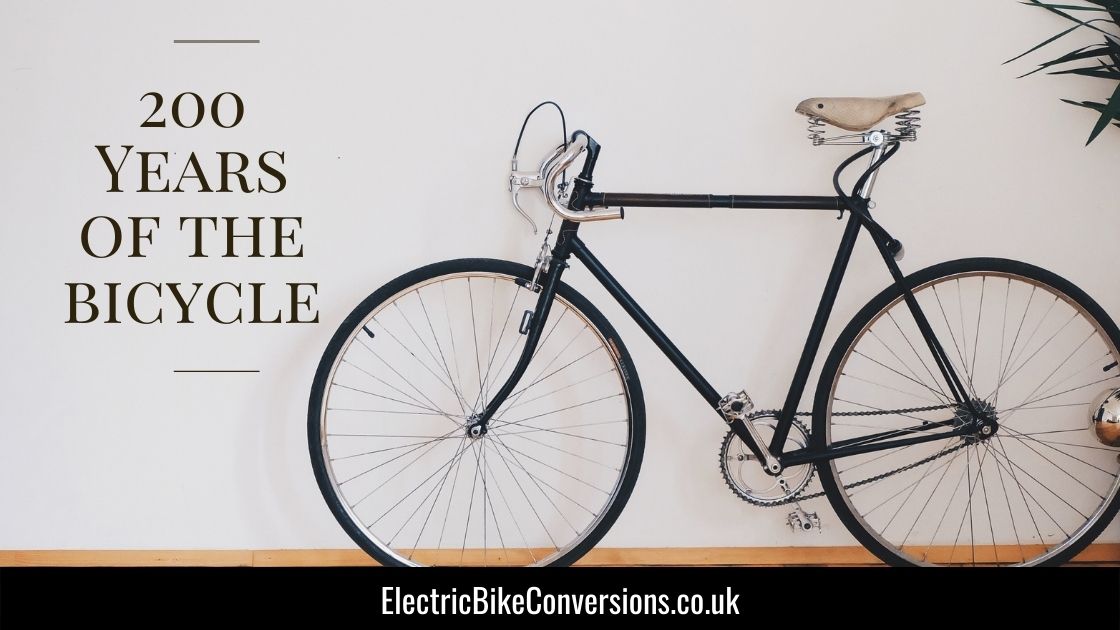 Here are some interesting facts about the life of the bicycle, starting from the very beginning to today:

First claims of the invention of the bicycle:

There are several claims of when the bicycle was first invented. The earliest claim comes from a sketch said to date back to 1534 which belonged to Gian Giancoma Caprotti, who was a pupil of Leonardo da Vinci. However in 1998 the claim was described as a purposeful fraud.

Later on in 1792, also not proven to be true, is the dispute that someone called Comte (from France) developed a célérifère. The célérifère apparently had two wheels with a wooden frame but with no steering ability. It was said that the person riding this would have pushed it along with there feet, whilst sitting on it. It has now been thought that the two wheeled célérifère never existed however there was a four-wheeler célérifère.

The first bicycle to be made was by Karl von Drais, a civil servant in Germany. Drais invented the Laufmaschine (running machine) in 1817 that was translated in english to Draisine . Drais patented this design in 1818 and nicknamed hobby-horse or dandy horse. Evidence was found that Drais had an interest in finding an alternative to riding a horse because of the starvation and death of horses caused by crop failure in 1816.

On the first reported ride on June 12, 1817, eight miles was covered in less than an hour. Made from mostly wood, the draisine weighed 48 pounds, it had brass bushings within the wheel bearings, iron shod wheels and a rear-wheel brake.

Denis Johnson of London announced late in 1818 that he would sell an improved model of the draisine. New names were introduced such as “pedestrian curricle” or “velocipede,” however the public preferred nicknames like “hobby-horse,”.

Johnson’s machine was a large improvement on Drais’s, being clearly more elegant: the wooden frame had a curved shape instead of Drais’s straight one. During the summer of 1819, the “hobby-horse” became the craze and fashion in London.

Nevertheless, Drais’ draisine inspired a French metalworker around 1863 to add rotary cranks and pedals to the front-wheel hub, to create the first pedal-operated “bicycle” as known as today.

Within the 1820s-1850s many human-powered vehicles similar to the draisine requiring the rider to balance, had been dismissed. New machines with  three wheels (tricycles) and four wheels (quadracycles) became very popular with the public. They came in a wide variety of designs, using pedals and hand cranks. However these machines were known to be very heavy.

The first really popular and successful design was French. Developed in 1863, it became very fashionable during 1868-70. Pedals were mounted to the front wheel hub. Pedaling made it easier for riders to go faster. The use of metal frames reduced the weight and provided a more elegant design. In England, the machine earned the name of “bone-shaker” because of its rigid frame that resulted in a bone-shaking experience for riders.

The safety bicycle was the most important change in the history of the bicycle. It shifted the public perception from being a dangerous machine for young men to being an everyday transport tool for men and sometimes women of all ages.

Cycling in Europe became more popular at the start to mid part of the twentieth century, however in America it wasn’t so popular. Over the 1920s, bicycles were considered to be for children and by the 1940s, most bicycles in America were made for children. However in Europe cycling remained an adult activity, and bicycle racing and commuting were all very popular.

The 21st century has seen a continued change in bicycles: in designing them, building them, and using them. Recent discoveries about bicycle stability have been facilitated by computer simulations. Once designed, new technology is applied to manufacturing such as hydroforming and automated carbon fiber layup.